There’s been a lot of talk about privilege lately, and it’s an important dialogue to initiate because it affects us all. But what exactly is privilege. And how does it link to racism, sexism and bias? These concepts are closely related and it is important to understand what they are.

Privilege is an invisible set of benefits, rights or immunity, favouring specific groups such as men, white people or able-bodied people[1]. As my business is focused on creating more gender balanced workplaces, I am particularly interested in male privilege and how this impacts women’s ability to progress at work. Privilege manifests in a variety of unhelpful ways. Research confirms that men benefit from higher levels of respect, status and wealth in society[2]. The amount of this benefit varies but the highest collective beneficiaries are white, heterosexual (or perceived to be), middle class, stereotypically masculine men[3]. Research also shows that men are more easily promoted, respectfully viewed and earn more than women for doing jobs in which they are equally qualified and equivalently rated[4]. Additionally, men who adopt less effectual leadership styles than women, suffer no direct consequence to their career progression, perceived competence or likeability[5].

I have no doubt that the men I know have worked hard to secure their promotions and career advancement opportunities. But recognising the benefit of privilege means understanding that women (or any minority groups) are generally not able to achieve the same level of opportunity, recognition, and material reward for the same amount of effort. 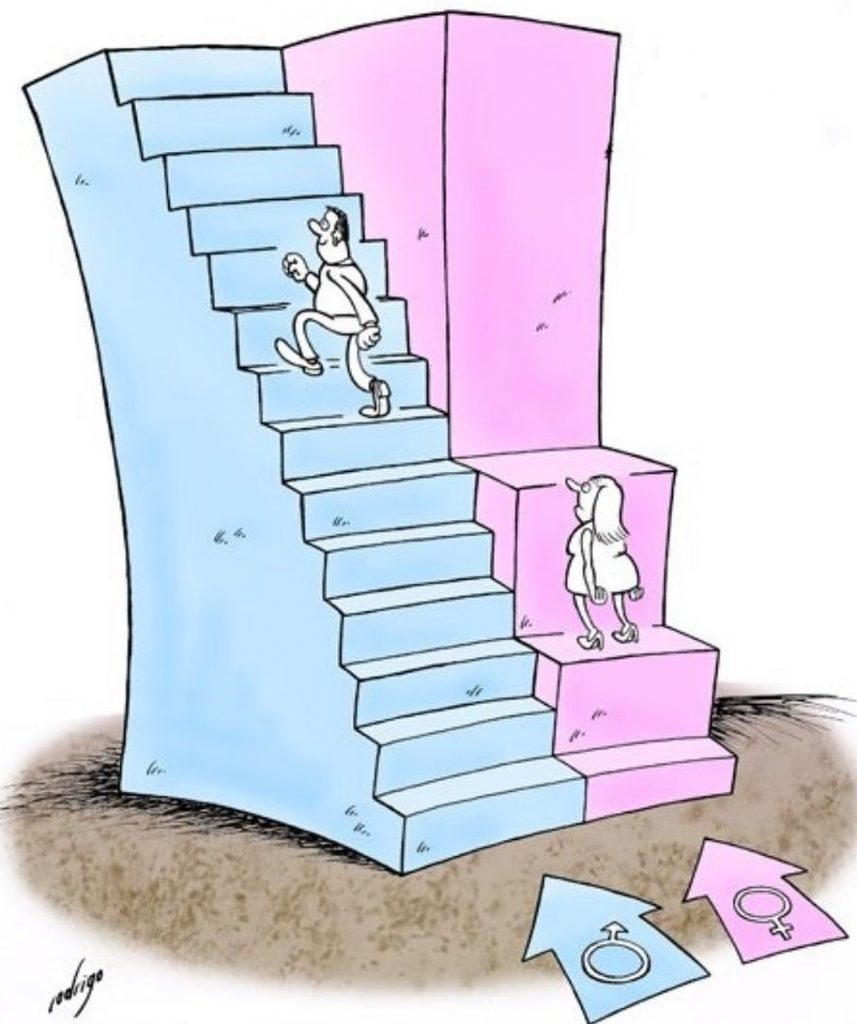 It’s important to acknowledge that on an individual level, most men do not feel they are the beneficiaries of privilege. After all they are not immune to economic strife, job loss or relationship failure. Equally, many women believe in the meritocratic ideal and that their efforts will be fairly rewarded, and their ventures into motherhood free from penalty. White male privilege is not a personal inference. The term is used to define and acknowledge the societal advantage received by the group. So while not all men individually benefit, compared to women and other minorities, most do.

And of course, intersectionality means that privilege will be held in different ways by different people, depending on their background and characteristics. As a well-educated white woman, I am acutely aware that I hold more privilege than my female friends and colleagues of colour, as well as those who are non-able-bodied, or LGBT+.

Race is a telling example on intersectionality. In the UK, ethnic minority women have a higher participation rate in tertiary education than other demographic groups; it is 3 per cent higher than for ethnic minority men, 17 per cent higher than white women and 24 per cent higher than white men. And yet these higher level qualifications are not necessarily leading to better jobs for BAME (Black, Asian and Minority Ethnic) women. They remain over-represented in the lower income earning professions such as the ‘4 Cs’ (catering, care work, childcare and clerical work), and under-represented in professional occupations[6]. When it comes to pay, women of all ethnicities experience a significant pay gap compared to their male counterparts. And this intersectionality bias continues in unemployment stats, which show black African women having the highest unemployment rates, while white women have the lowest. For ethnic minority women who do achieve board director positions in a FTSE350 company, they are outnumbered nine to one by white female directors[7]. Of course, the experience of women of colour differs enormously. While only 8 per cent of Black Caribbean women are outside the labour market, this number is exponentially higher for Pakistani and Bangladeshi women (36 per cent and 40 per cent respectively)[8].

In the western world, we’re primed to believe that opportunities are equal and that what separates success from failure is a lack of either aptitude or application. But history, and also current affairs, are full of examples of people denied equal societal participation or human rights based on their perceived inferiority, as the above statistics illustrate. Suggestions of privilege are sometimes denied based on our belief in meritocracy. But the awkward truth is that meritocracy is a myth. To understand why, we need to first understand bias. 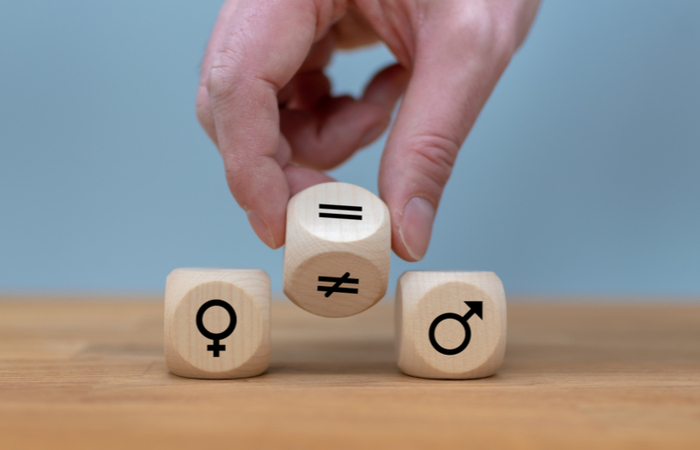 Bias, sexism and the link to privilege

The processes we use to evaluate people are mostly unconscious and have an important evolutionary basis. Cognitive shortcuts prevent us from being overwhelmed with information and allow us to respond to immediate threats. When taking in information, we firstly classify someone to a general stereotype of gender, race, etc. Then we attribute or fill in the blanks by assuming they meet all the characteristics of that stereotype. Finally, we calibrate the classification with new data. This last step is where we find the biggest opportunity for bias because it relies on the observer considering counterfactual data and effectively admitting to errors in their earlier evaluation[9]. So for example, if our stereotype societal messages are that men are great leaders and women are great nurturers then meeting a female leader (or a male primary carer) runs counter to our stereotype expectations and results in bias. Judgements are made in milliseconds and attempts to override initial assessments are often ignored so on an unconscious level we may reject those who are counter stereotype[10].

Yet bias – conscious or unconscious – does not in itself equate to sexism, or racism. Think of bias as the beliefs (or perhaps prejudices) that a person holds. Where this becomes sexism – or racism – is where these biases are translated into action. Such as choosing to hire a man over a woman because you feel he is inherently more competent in the ‘tougher’ or more technical aspects of the role. Or excluding a recent mother for promotion because you assume she won’t be able to travel now that she’s had a baby. The systematic ‘acting out’ of unconscious biases means that in most c-suite environments a heterosexual white man is favoured above a gay man, or that a highly educated white women is favoured over a lower socially graded white man. It also helps explain why only four of the US Fortune 500 CEOs are black or men of colour, and none of them are women[11]. And why of the British citizens holding FTSE 350 board director roles, only 2.6 per cent of these positions are held by people of colour[12].

Sexism lies at the heart of gender inequality. Individual acts of sexism may appear benign, but collectively and over time these seemingly innocuous actions create a climate of male dominance. Male privilege becomes the by-product of this culture, as indicated below. 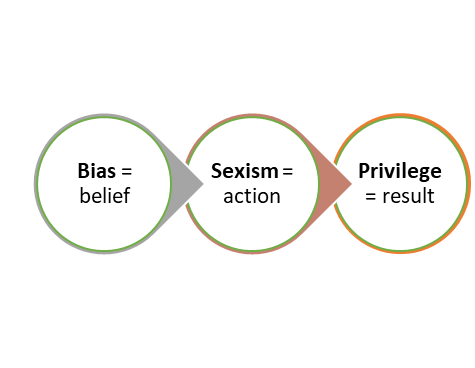 So how does male privilege play out? Examples of privilege experienced by white men include[13]:

“Sexism is not a glass ceiling. It’s a labyrinth of micro-inequities that add up over a lifetime”

For most women, the daily experience of being on the receiving end of sexism and privilege manifests as micro-inequities. These are small events which are often short-lived, hard to prove, at times covert or unintentional, and frequently unrecognised by the perpetrator. Micro-inequities occur wherever people are perceived to be different[14]. Examples include: being labelled as being too emotional or being told to lighten up, when raising issues about gender equity; Routinely being mistaken for the secretary or someone more junior; Being the default for making the tea; Being labelled bossy or b*tchy if you’re assertive; Often, particularly at senior leadership level, team-building exercises favour male stereotype venues and activities such as golf or football matches, pubs, sporting competitions and in some extreme cases, strip clubs. I’m yet to see any men attending a corporate spa day or pedicure event. Some particularly grating experiences include a friend discovering her male colleagues had a rating system on her and her fellow female colleagues’ attractiveness. Two other friends recall being told that although they have great potential, they would never be considered for a promotion while working part-time.

So what can we do?

So what can we do about bias, sexism and privilege? I work with organisations to address the systemic barriers to women’s progression. But for those not in a position to effect organisation-wide change, what can be done at an individual level? First and foremost it’s about awareness. Consciously tuning in and seeing things differently, or from someone else’s point of view can be a powerful way of de-personalising the issue and becoming more mentally inclusive. Exposing yourself to new experiences is a key way of broadening your perspective, such as socialising with people outside your ordinary social circle, or mentoring those in the workplace with different attributes to you. Finally, and importantly, using your privilege to help others. Here are 10 practical ways in which men can do this:

There is an important role men can play in fast-tracking gender equality. Given men currently hold more positions of power, their voices and influence can materially help to acknowledge and dismantle the biases and male privileges that hold women back. We know from research that women can benefit from gender equity, but we also know that men and children do too. Men in gender equal relationships are healthier and happier and report greater marital satisfaction, and children growing up in equitable family environments have greater levels of achievement and lower levels of absenteeism[15]. Every one of us has a contribution to make in this strand of our social history. But it is men’s voices that we most need to engage on this topic. Or to put it more poetically, in the words of Tennyson: The woman’s cause is a man’s. They rise and fall together.

* Before posting this article I sought feedback from several men. Some questioned whether there was evidence to support the point on cyber trolling and rape threats: there is indeed significant evidence from around the world to substantiate this. For example, up to 23% of European woman have experienced cyber trolling in their lifetime, and up to 70% of all cyber-stalking victims globally are women. Trolling can be particularly extreme in politics where senior female politicians are three times as likely as their male counterparts to be trolled on Twitter. UK Labour MP Jess Philips received 600 rape threats in one night. Online abuse has been cited as a major reason for a disproportionate number of female MPs standing down just prior to the last general election. You can read more in these links: https://www.hopenothate.org.uk/magazine/in-search-of-hope/the-freedom-to-be-free-from-abuse/ and https://www.globalcitizen.org/en/content/misogynist-online-abuse-digital-harassment-sexism/