The 10 barriers blocking female progression in your organisation

Despite progress in advancing women’s representation in the workplace, The World Economic Forum has found that we are still a century away from closing the economic gender gap globally. And in the wake of the coronavirus pandemic, even organisations with the strongest track record, will need to redouble their efforts to avoid losing the gains they’ve made. But how can organisations take such a nuanced and multi-faceted issue and significantly move the needle of progress.

Our research shows that an interplay of three key barriers exist to greater representation of women in senior leadership roles: societal, personal and organisational [1]. Within this framework we’ve identified a critical subset of structural and cultural barriers that occur in organisations. This article focuses on these nine barriers and what employers can do to address them. 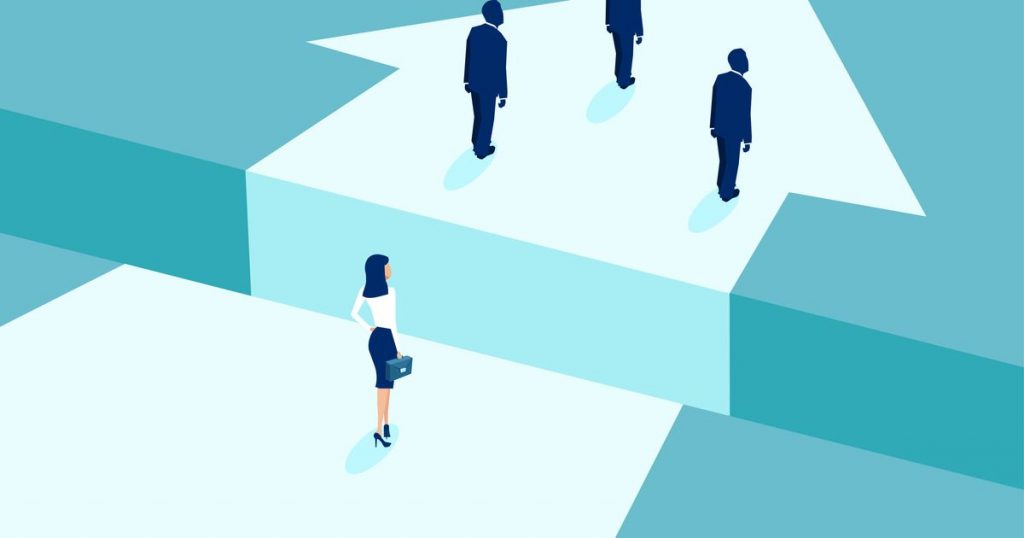 1. Unequal access to sponsorship: a study reported in Harvard Business Review found a strong gender bias in mentoring support, with women typically encouraged to change and adapt in order to progress, while men were given public support and helped to take charge of their careers [2]. Senior level men are 50 per cent more likely to have a sponsor [3], and without a sponsor’s influence to advocate for the ‘sponsoree’ in the most senior executive circles, women are not always equally considered during the closed-door promotion and succession discussions. Implementing a formal Sponsorship Programme, with clear expectations and deliberately matched sponsors with sponsorees, can significantly help bridge this gap for women.

2. Elusive critical experiences: the absence of visible, high-profile assignments inhibit women’s career progression, particularly at the ‘off-ramp’ stage of their careers (28‑45yo). Organisations can mitigate this barrier by deliberately offering targeted development experiences that provide visibility of female talent – such as gaining P&L accountability, leading a product or team turnaround, or launching a new revenue stream.

3. Lack of role models: positive role models increase career commitment and satisfaction, and we know that women are likely to pay this role modelling forward. Organisations can help by publicly celebrating and giving visibility to their top female talent, as well as offering mentoring and sponsorship programmes to develop more junior talent.

4. Less powerful networks: a powerful network can increase both the speed and likelihood of promotion. Yet various studies have shown that informal networks are often segregated by gender and race, and as such, women are less likely than men to have the strong professional networks, insider information, and social ties to elites that are critical to promotion. Additionally, whereas men’s work and social networks tend to overlap, this occurs less with women’s networks. As it is more time consuming to maintain two networks, this can put women at a disadvantage[4]. This can be redressed by providing formal opportunities to interact with high-status execs across functional, organisational and geographic lines and for executives to formally introduce and ‘hand over’ relationships in a managed and positive way.

5. Intersectionality: this term was first used to explain a different level of oppression and prejudice that African American women experienced compared to white women. The concept has since been widely used to recognise how different elements of our identity (such as gender, race, age, class, sexual orientation) overlap and influence our experiences. While all women are subject to barriers to career progression, some women are impacted more harshly. Research indicates there is a negative additive effect of gender plus ethnicity on career progression. Black women are less likely to receive promotions than other groups of employees and are significantly under-represented in senior leadership. 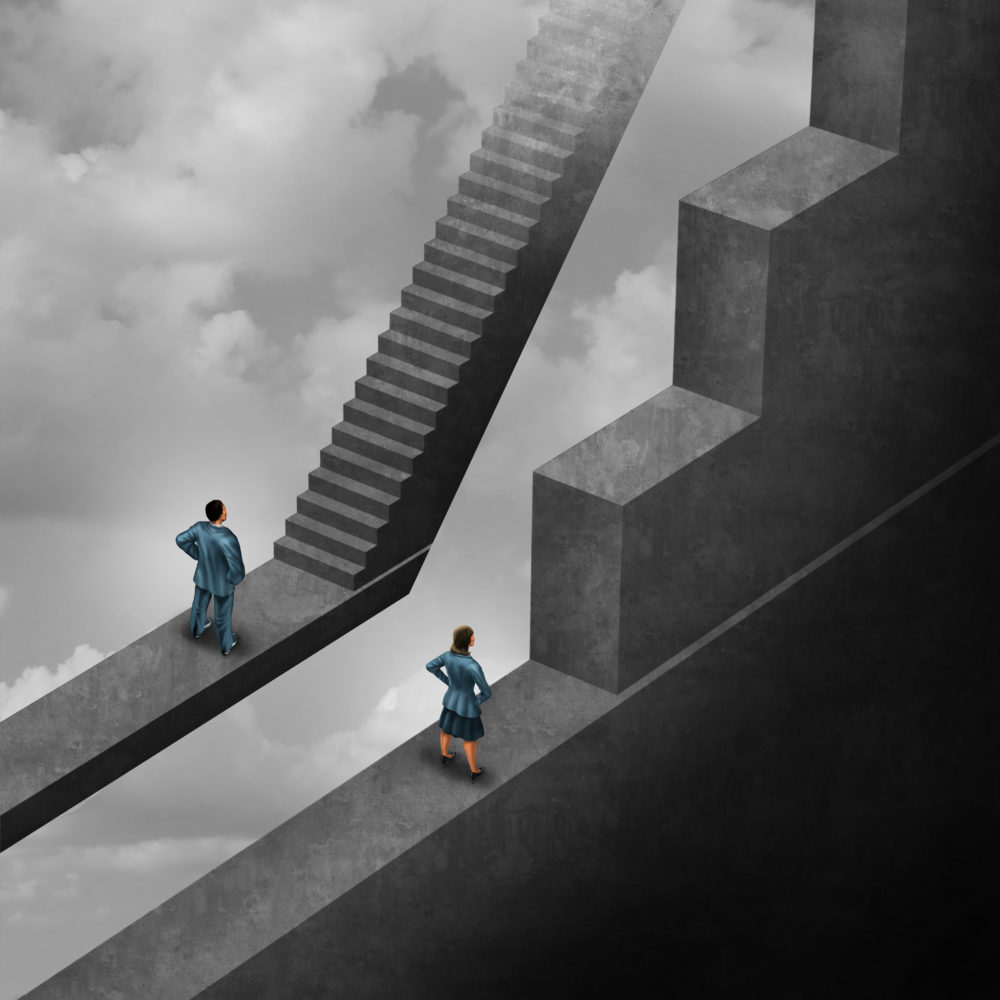 1. ‘Always available’ culture: McKinsey found the dominant model in the business world equates senior leadership with total geographic mobility and 24/7 availability. When viewed in the context of the known Double Burden or Second Shift where woman are carrying a disproportionately larger share of domestic and care work, this leadership expectation becomes the single greatest barrier to gender equity. Companies that can start to dismantle these unrealistic workplace demands will access a more diverse talent pool.

2. Implicit bias and gender stereotyping: Despite having a significant impact on women’s career advancement, unconscious bias can often be difficult to observe or influence. A large-scale study by the ILO found that organisations with a male CEO and/or Chair were more likely to have a male-dominated organisational culture [6]. Recognising and actively counterbalancing this, through education on bias and privilege at the very top of the organisation, is necessary to promote and safeguard a fair playing field.

3. Micro-aggressions, discrimination and everyday sexism: nearly two-thirds of women have experienced everyday sexism or micro-aggressions in the workplace, such as their comments being dismissed, having to provide more evidence of their competence or being mistaken for someone more junior. These behaviours can deter women from wishing to advance their careers or even reduce their belief that career advancement is possible. Educating employees and holding them to account on such behaviour is important. Initiatives such as ‘listening’ circles, where such slights can be discussed in a psychologically safe environment, can be helpful at raising awareness and accountability.

4. Male competence assumptions: According to Stanford University, research consistently shows that in stereotypically male tasks – including leadership – men are perceived to be more competent than women [7]. Powerful sociological wiring means that men are judged by a more lenient standard than women which is even more pronounced in traditional, male dominated cultures. While an incredibly nuanced and mostly unconscious process, organisations must actively work to counterbalance bias in their appointment and promotion decisions. Awareness-raising of all individuals involved in recruitment and selection decisions, along with de-biasing the underlying processes, is critical.

A dynamic interplay of these barriers occurs over the course of a career and within different organisations and industries. While every organisation is different in their challenges, we recommend a Six Step Process to help achieve gender equity in the workplace:

1. Ensure strategic alignment: Ensuring alignment between inclusion and diversity priorities and the businses strategy is key. As is top team engagement. If the Exco show their commitment to inclusion efforts, through visible means such as targets and active monitoring of key metrics, it sends a very clear message to the rest of the organisation that this needs to be taken seriously.

2. Define the gap and plan: A thorough diagnosis of the underlying challenges in achieving gender balance in senior roles helps to ensure a well targeted approach and strategy. Using data – both quantitative and qualitative – to understand your starting point can ensure you pinpoint the real barriers, and not just the ‘popular beliefs’ about what is getting in the way.

3. Engage the organisation: Engaging men (and women) to understand the challenge and see ‘what’s in it for them’ is crucial in enabling the requisite buy-in to achieve greater gender inclusivity. Creating the safe spaces for employees to share their needs and experiences is a critical enabler for creating the buy-in required.

5. De-biasing and aligning the system by scrutinising all HR processes to ensure no unintentional bias: As a minimum, HR practices need to be scrutinised from top to bottom to ensure they don’t inadvertently undermine diversity and inclusion efforts. Recruitment, promotion, appraisal and reward practices should be carefully reviewed to ensure no in-built bias. Stripping out gendered language from job descriptions and ads, removing identifying information from CVs – such as race and gender, ensuring balanced interview and promotion panels, and analysing appraisal and salary data for different minority groups to ensure no inadvertent unfair treatment, are all powerful ways of removing bias from the employee lifecycle. Further, employee networks and resource groups should be aligned to the over-arching inclusion and diversity objectives.

6. Develop women: While many of the barriers to women’s progression exist at a societal and organisational level, there are nonetheless actions organisations can take through thoughtfully structured development programmes to address the personal barriers. Women-only development programmes can be a powerful way of creating the environment that allows women to develop and manage their leadership identity transition.